The Combat Weapons Team is hoping to become involved in competitions that are held both within the Eastern Ontario area by civilian leagues, and competitions held internationally by the three United States Military Academies. The Team believes that these competitions are the best way to test what a soldier has learned, since they simulate the types of skills required in actual combat. Therefore, competing at a wide array of military-style competitions is an important part of the Team’s intent.

This annual request of $10,000 will allow the team to compete at the highest level and showcase the professional training of our future officers.  Your support to our Truth Duty Valour Fund for current student needs will make this training possible. 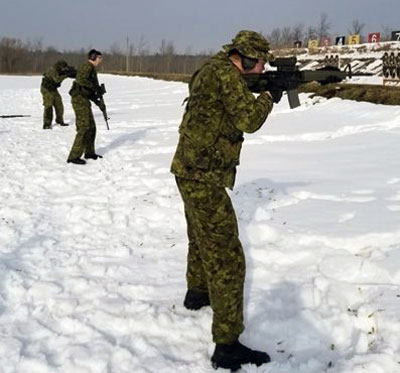 “The RMC Combat Weapons Team recently held its first practice at the CFB Kingston range aiming to develop the students individual skill at arms in an operationally applicable way.

This represents a departure from the philosophy of the previous iteration of the team, which was more focused on classical DCRA-style marksmanship.  The Combat Weapons team is formed of 25 Cadets representing a mix of all years and a wide range of military occupations.

As well as fostering individual skills with the C7A2 rifle, Browning 9mm pistol and 12Ga shotgun, the Combat Weapons Team intends to develop coaching/mentorship skills. This will permit for members to be assets not only at RMC, but also post-Arch once arrived at their unit. The final objective of the team is to compete in and win competitions.”