Friday March 6th, 2020 was a beautiful, sunny winter day in Vancouver. On this day, the proud traditions of Royal Roads’ rugby were reborn at the Vancouver Masters’ Rugby Festival.

Twelve ex-cadets took to the pitch wearing white jerseys with blue hoops bearing the RRMC coat of arms on their chests, looking much like the Royal Roads’ jerseys of the late 1980s. These intrepid ex-cadets – a mix of purebred Roadents and Royal Military College of Canada (RMC) grads — were joined by eight hardy souls from Alberta, calling themselves “Don’t Panic”, and some local ruggers. Together they formed “Royal Roads Don’t Panic” (RRDP). Facing three opponents on the day (the Twits, SOBS and Snowcaps), RRDP recorded one tie, one win and one loss. This event was a fitting display of the five core values of World Rugby – integrity, respect, solidarity, passion and discipline, as well as the Canadian Military Colleges’ motto: Truth, Duty, Valour. But, above all, it was an expression of the bonds of friendship formed through the milcol experience, all in the context of over-35’s rugby, where nobody takes themselves too seriously.

How is it that 25 years after RRMC was closed as part of the federal government’s program review in 1995 that Royal Roads rugby could be resurrected? Some would suggest this was just a chance to have fun and enjoy some post-game beverages. That may be true, but a deeper answer can also be found in the legacy of leadership produced by the varsity rugby program, a program that lives on at RMC today.

Sharing common experiences in the face of adversity has long been a key part of leadership development at the Canadian Military Colleges. Adversity in training builds self-awareness, resilience, camaraderie and more. Rugby players, current and past, have a special sense of solidarity and passion (you could also call it duty and valour) because of the intense physicality of the sport.

At the core of the dozen ex-cadets who played for RRDP on March 6th was a tight group of friends from the RRMC/RMC class of 1991. A few years ago, they started an annual tradition of gathering in Vancouver in March to watch Canada at the World Rugby Sevens tournament. The Masters Rugby festival takes place on the Friday before the Sevens. At first, participation started with just one Roadent, 17940 David Adshade (RRMC/RMC 1991), a member of a local Capilano rugby club. However, with each year, the number of ex-cadets getting back into the game grew.

This story goes beyond the events in Vancouver on March 6th and the excitement of watching Canada win the bronze medal at the Vancouver Sevens over the weekend. Thanks to the leadership and initiative of one industrious ex-cadet (Jerry Dover), and through the reach of social media, interest among a broader group of alumni for these commemorative RRMC rugby jerseys has taken off. At the same time as the first dozen jerseys were ordered for the players, several more were ordered for alumni who could not make it to Vancouver. A second order of commemorative RRMC rugby jerseys is being planned to coincide with the September 11-13th Royal Roads homecoming in Victoria and the September 18-20th RMC reunion weekend in Kingston. More information on how to order a jersey will be provided in a future edition of eVeritas.

The legacy of leadership from Canadian Military Colleges’ rugby is rich. It can be found among officers serving in all branches of the Canadian Armed Forces, including the Canadian Special Operations Forces. It can also be found among veterans who have gone on to be specialists in their professional fields, entrepreneurs, public servants, senior executives and more, all while being involved as volunteer players and coaches with local rugby clubs in communities across the country.

Today, more than 65 cadets are on the roster of the varsity rugby program at RMC in Kingston. Public funding for this program only covers the essential expenditures for the first squad, with the balance of the resources for the second team coming from donations to the RMC Foundation and the through volunteer contributions of staff and alumni. Playing in the Ontario University Athletics association, RMC is a small school in a league facing opponents with much larger populations. Despite this fact, RMC has a record of reaching the play-offs, and a reputation of being tough competitors on the field. Having the numbers of players for a second squad and the resources to support player development is an opportunity that did not exist at Royal Roads. RRMC was also a small school in a tough league, but the cadets had a reputation as fierce competitors too. With some current cadets being selected to play for Canada in their age-grade, the future holds promise for more strong performance on the field but that future also depends on continuing support from the RMC Foundation. There are several options for one-time or recurring donations through the Foundation’s web-site.

Keeping the legacy of Canadian Military Colleges’ rugby alive can be done in many ways. Supporting the current RMC varsity program would be an important one. Buying and wearing a commemorative RRMC jersey to keep memories alive would be another, but so too would be participating in the 2021 Vancouver Masters Rugby Festival. Having a year to train, say by playing touch rugby with a local club, would make it easy and fun. As the dozen ex-cadets who played as part of “Royal Roads Don’t Panic” can attest, staying in the game is a great experience. We have an opportunity next year, if there are enough ex-cadets interested and available, to field a team entirely composed of RRMC/RMC alumni. I know I am already making plans to be there to join my friends in the class of 1991. If you are an ex-cadet rugby player, can we count you in? Please let me know at: hebert-stevenson@sympatico.ca 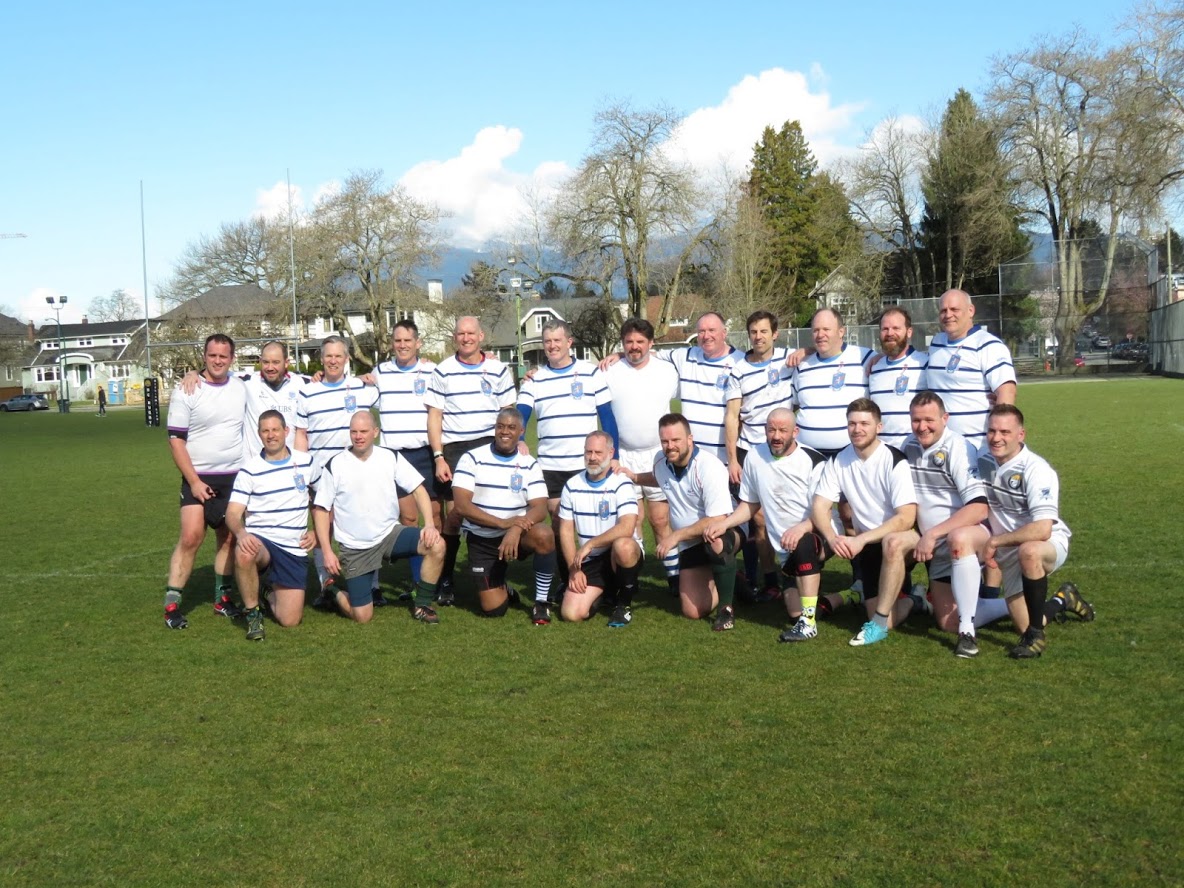 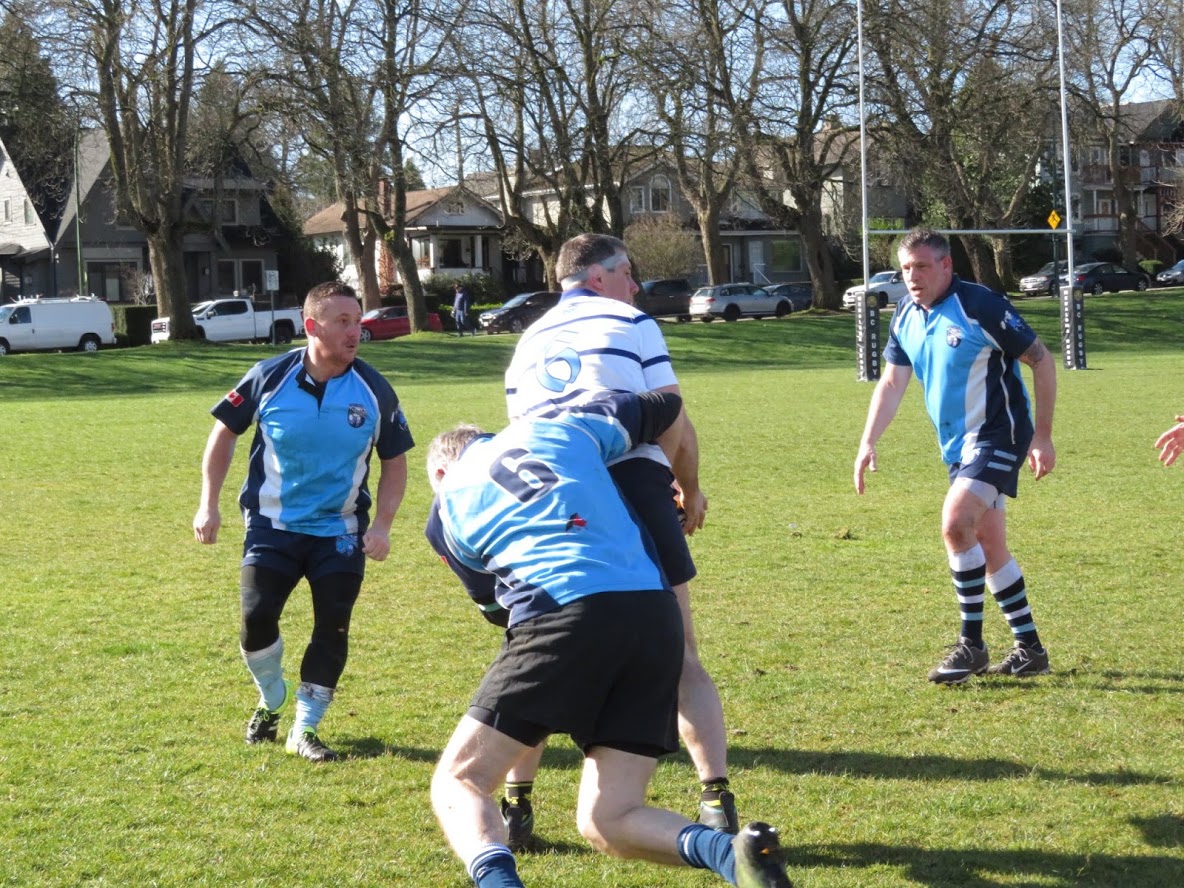 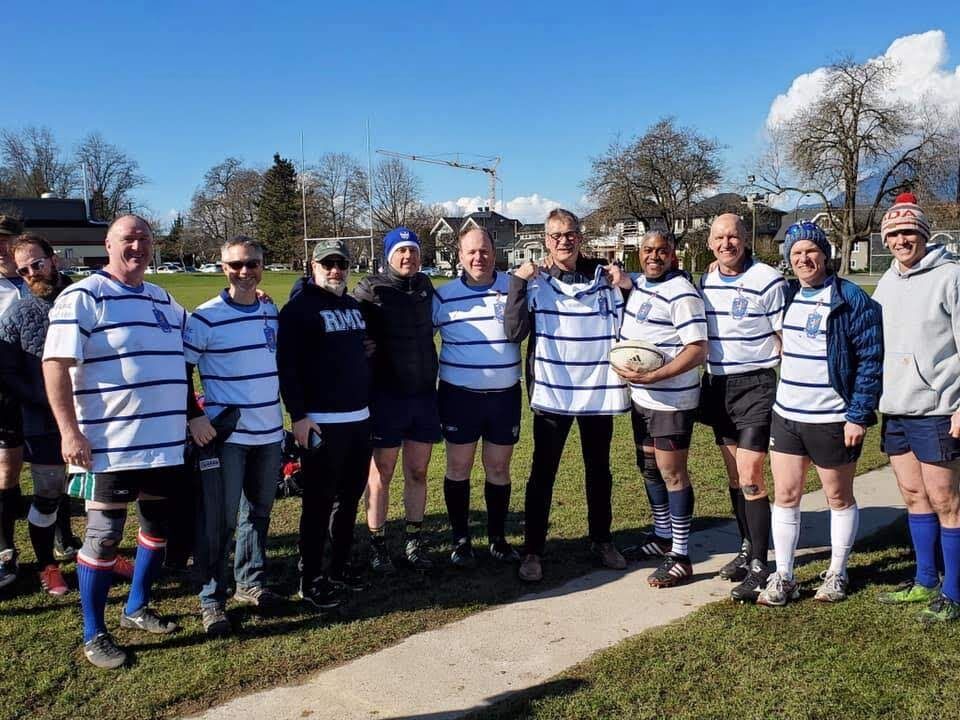 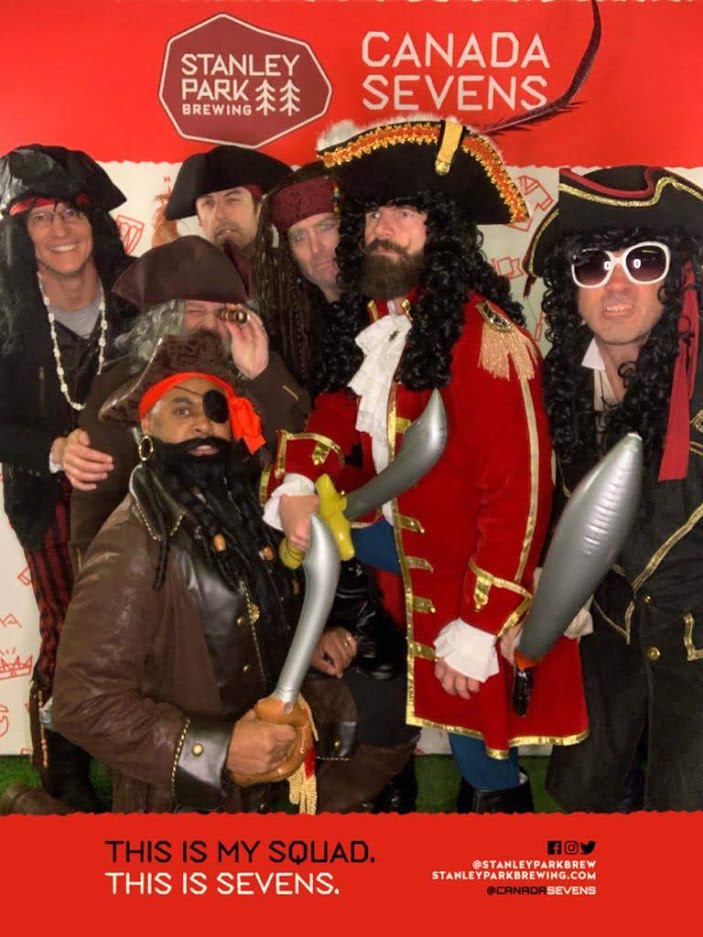