History and Traditions: A Family Affair

History and Traditions: A Family Affair

Engage for 50– History and Traditions:  A Family Affair

If only the walls of our Military Colleges could talk.  They would tell us the stories of our grandfathers and fathers, our brothers and uncles, our nephews and sons.  They would speak to the triumphs and successes of our grandmothers and mothers, our sisters and aunts, our nieces and daughters.  The walls would speak to their passion and courage and how it paved the way for our future generations. 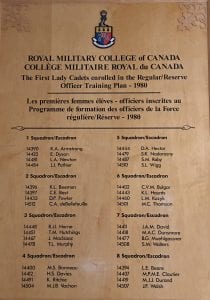 The dorms would tell the story of sacrifice, courage, leadership, and Military Traditions.  They would speak the truth to who actually commits those skylarks and what it is really like to be a member of a team and the Military Colleges family.

From the Old 18 to the First 32 we have grown outside the conventional walls that once bound us.  We have created an atmosphere and a way of life that Officer Cadets and our future leaders of Canada strive towards.

The walls, the architecture, the furniture, the peaks and the valleys all telling the story of how your heritage led you through the Arch, and to your commitment to the Canadian Armed Forces and the phrase:  Truth, Duty, Valour.

If the walls could speak, they would speak of leadership and the value of a Canadian Military College education.  The large wooden boards hanging in the historic halls of Mackenzie speak to fathers and sons who were Cadet Wing Commanders through generations like 5533 Glenn Allen (1962), and his son 15708 Michael Allen (1987).  It shows that their leadership ran through their blood from father to son, while one made the ultimate sacrifice for our country.

If the halls could speak, they would speak of the three generations of the Beare Family who walked the many changing landscapes of RMC from 3584 Archie Beare (1952) to his son 13337 Stuart Beare (1983) and then Stuart’s daughter 25002 Sarah Beare (2011).  Archie started his journey at RRMC, Stuart CMR, and Sarah RMC, but all three lines of history, spanning some 59 years, decided to all walk through the same Arch and proudly serve their country.

If the grounds could talk, they would tell the tale of mother daughter legacies. They would show the footprints of the mothers and daughters who proudly faced the journey some 27 years apart like 16286 Carolyn Hug (1989) and 26374 Marie-Claire Pharand (2016). They would highlight the path of 17312 Jennie Carignan (1990) a trailblazer in the Canadian Army as well as the first female combat General, and how her daughter 27865 Amélie Lefrançois, will follow her footsteps and march through the Arch in 2020.  The grounds would tell us the tale of grandfathers and grandsons like 2987 William Sullivan (1952) and 27197 Blake Sullivan (2017), or 7257 Michel De Grandpré (1968) and 27534 Colin De Grandpré (2019).

Maybe your tale would start as the first in your family to enter the Colleges.  Maybe it wasn’t a long genealogical line that guided you, maybe you showed up one day with a  suitcase in your hand and no idea what you were getting yourself into like H7076 John van Haastrecht (1966) and later his brother 7821 Peter van Haastrecht (1969).  Both men coming from RRMC to RMC after their parents John and Elisabeth van Haastrecht left the Netherlands in 1949 to call Canada their home.

I personally receive many calls and emails asking me “If I am related to 8294 Art Jordan (1970)?” We may share the same last name but unfortunately, not the same DNA.   I have chosen to become a member of Art’s family nonetheless.  I now tell folks who inquire that I am an honourary member of the family and E0764 Art Jordan Jr (1998), is my brother.  Art Jr didn’t seem to mind adding me into the family as every time we spoke, or saw each other on Campus we always waved and exchanged the customary: “Hi Sis” and “Hi Bro”.

Regardless of the lineage, or the decades that separate us one thing is true; we are all family at RMC.  It is because someone marched before you, and it is for all of those who march after you that you continue to support the future leaders of Canada through your support to the RMC Foundation.

Whatever your story, you stand together shoulder to shoulder, together as one.  Daughters and sons, uncles and aunts, sisters and brothers.  Your motto unchanged – Truth, Duty, Valour.